Clonezone is the UK’s and probably Europe’s first superstore specialising in underwear, swimwear, accessories and more catering to the gay men community. Their humble beginnings trace back to 1982 when they appeared pushing a wheelbarrow full of T-shirts and toys about the nightlife of London’s Earls Court. Their first store was founded by four friends inside of Brompton’s, a legendary Gay pub in Earls Court that is now unfortunately gone. A growing popularity helped them to open their own chain of stores in 1984. During a risky time for the LGBT community in the UK, the stores offered a safe place to shop for the hottest fashion and more. The new stores at the time were opened by icons such as Lily Savage, Sue Pollard and Kenny Everett.

During their 35 years in the Gay scene they have supported HIV and AIDS research, promoted safe sex, supported and involved in charity events and fundraisers in the UK. They were the first company to import in the UK the Levi’s 501 jeans and their bespoke leather designs have been included in exhibitions at the V&A museum and featured in movies such as “The Full Monty” in which actors appear wearing their red PVC thongs.

Due to the recent recession, like many other high street chains – Clozezone struggled. However, their iconic brand was recognised and fortunately saved. Clonezone came back bigger and better than ever! Today, you can find their stores in the UK at Soho and Earls Court in London, in Manchester and Birmingham but also in Berlin, Germany and Vienna, Austria and there are plans for expansion in other European cities. You can also purchase their products online from CloneZone Direct. Their collection includes underwear and swimwear from leading brands such as Andrew Christian, 2(x)ist, Addicted, Cellbock13, Barcode Berlin, Modus Vivendi, Marco Marco and Gregg Homme among others.

This weekend marks Clonezone’s official 35th Birthday, although they have plenty of exciting things planned for throughout the year! The superstores celebrates with a limited time offer of 35% off everything in store (excluding Mr. S Leather and items already on sale). You’d better hurry though because this offer started this morning and lasts only until midnight (GMT) Sunday 5th March 2017. 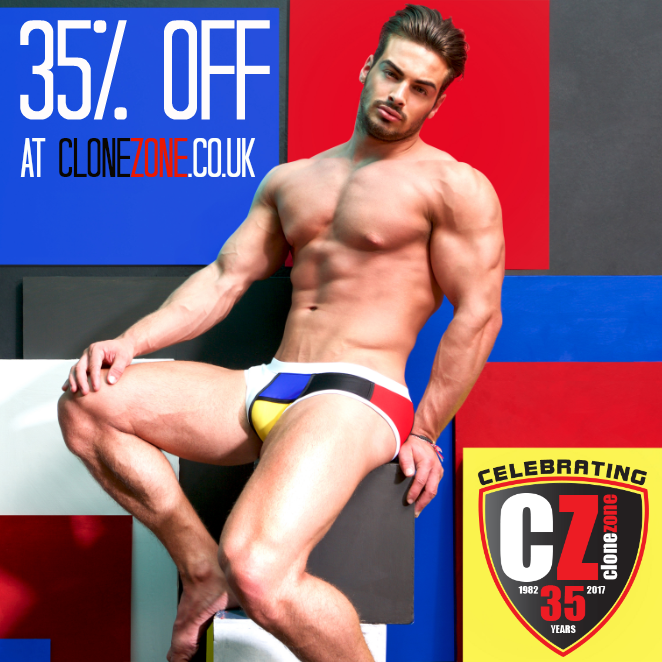