Andrew Christian Trophy Boy is a range of underwear designed for the well-endowed guy to show off his assets but still be comfortable.
Standard fitted underwear usually has a front pouch that is too small for a Trophy Boy and consequently the poor guy is uncomfortably squashed. Andrew Christian has conveniently recognised this issue and created the Trophy Boy collection. It’s effectively an adaptation of his famous best-selling Almost Naked collection. The cut of the underwear creates a soft front pocket which allows a guy to naturally hang free. Andrew Christian has called this ‘anatomically correct’ underwear. Instead of being supported by a front pouch, you are allowed to hang but the pocket prevents you from slipping out of the underwear. The Trophy Boy collection has a much larger front pocket to allow even more space for that larger package.
The benefits are great. The extra room at the front of the underwear helps to reduce sticking, sweating, re-adjusting and chafing. The front pocket doesn’t enhance the front as such, for this you need the Andrew Christian show-it technology. But by providing extra space, it does certainly show off what you have!
The Trophy Boy collection has its own iconic waistband design which lets you announce your status to the world if it’s showing over the top of your jeans. It’s also made with ultra-slimming elastic which pulls less on your waist, helping to slim the appearance of your waistline.
The material is excellent quality being made from bamboo fibre. The pulp of bamboo is used to create a rayon fabric that is super soft and smooth. It’s mixed with a little spandex to give some stretch and a great fit.
The Trophy Boy collection has been so popular that Andrew Christian has a special dedicated Facebook page for it and a hashtag for it. If you search around on Twitter for the hashtag #ACTrophyBoy, you will find many pictures of Trophy Boys!
Andrew Christian has introduced a selection of new designs to the collection in 2014 and some of these feature elements of his other collections, such as show-it enhancement technology. Here are some of our favourites below.

This boxer has some sexy side slits to reveal a little flesh. 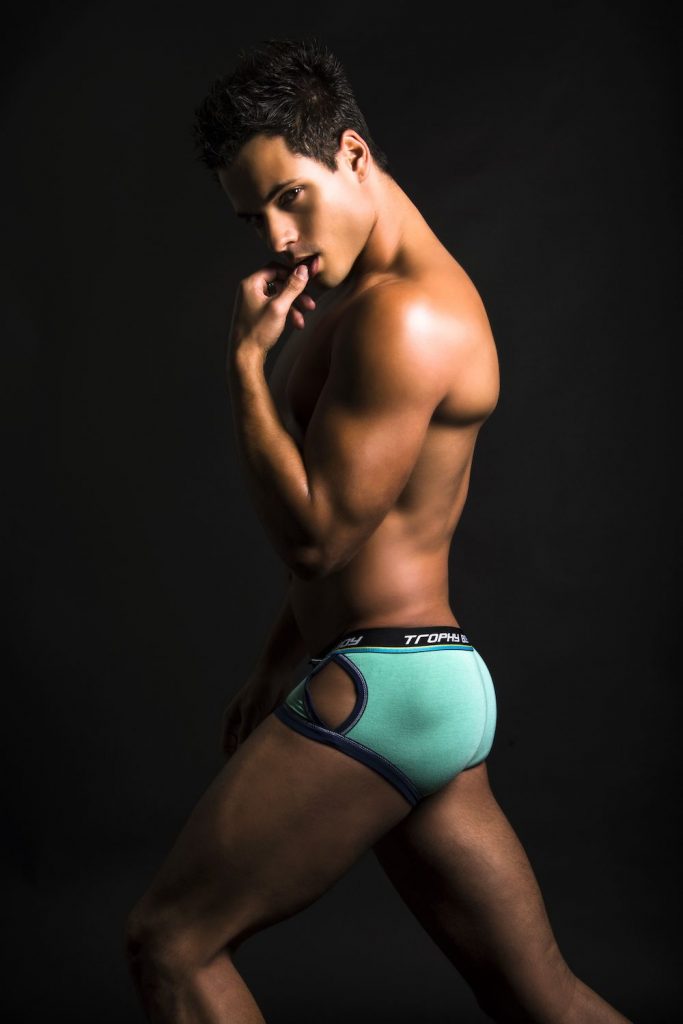 Here is Topher DiMaggio in his Glimmer brief. The brief has a little gold sparkle on the waistband. 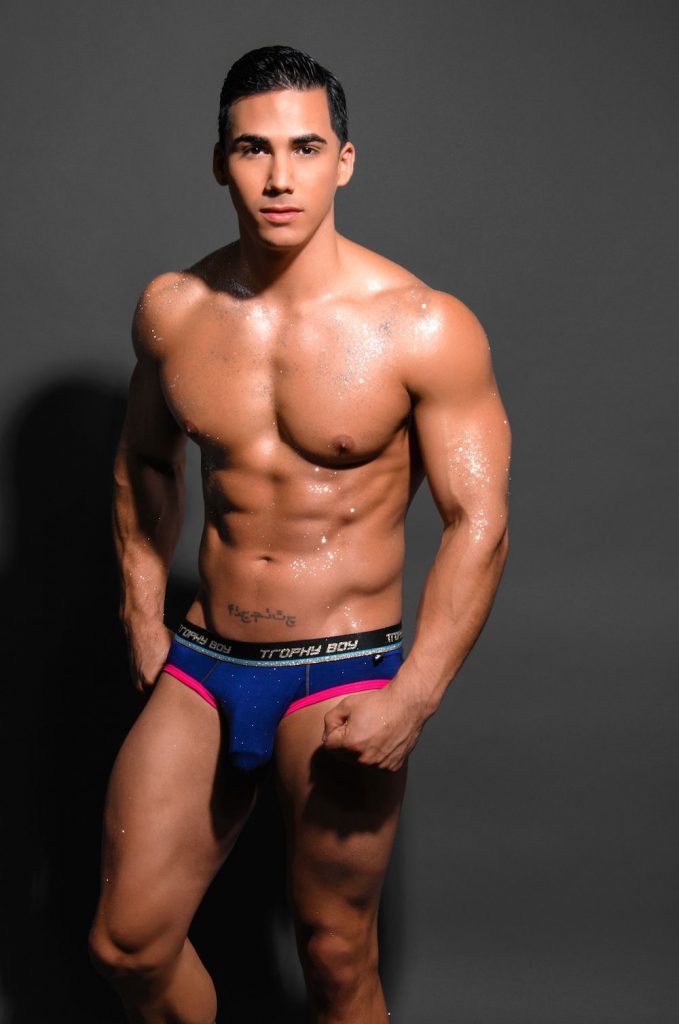 This jockstrap has two rear straps which help to lift the buttocks more and create a bubble butt. So that’s both extra space at the front and a bubble butt, all in one jockstrap! 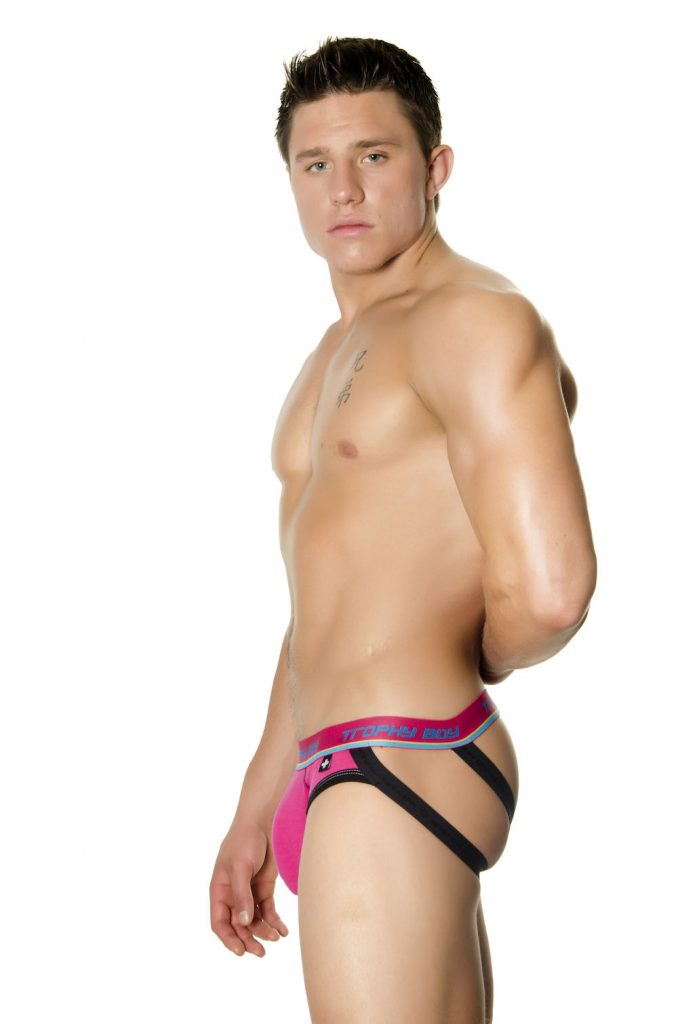 This brief includes enhancing underwear technology, gently lifting, supporting and enhancing your front by up to 1.5 inch. 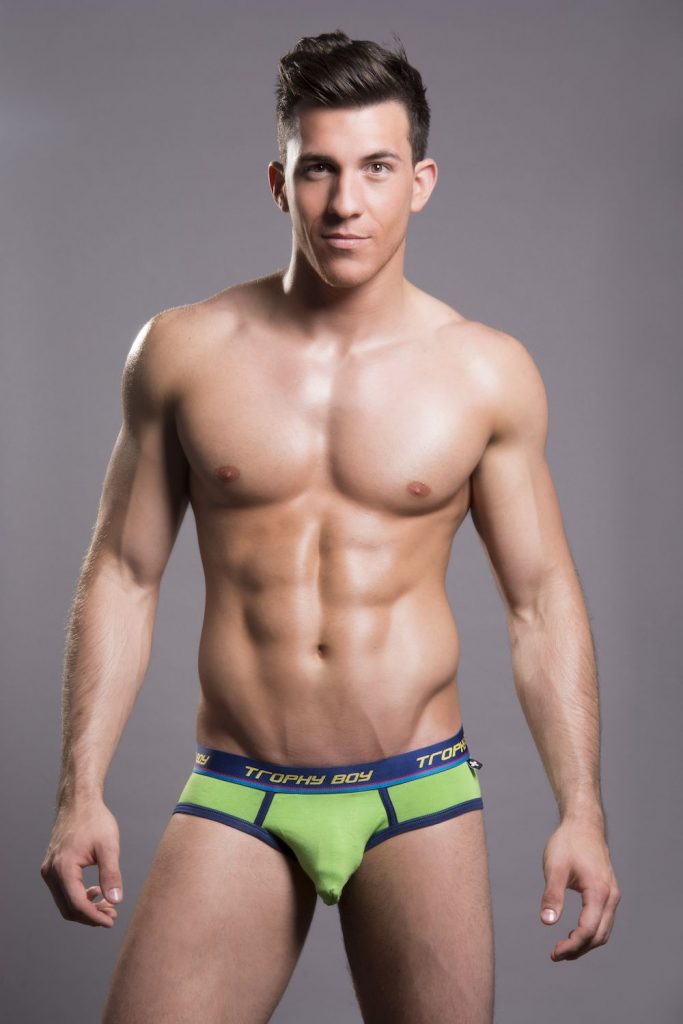