Search
Home
Men and Underwear
Envy Menswear proudly celebrates its first anniversary in the luxury men’s intimate wear market. Envy’s 204 SKUs are currently available in the United States, United Kingdom, Australia, Austria, Scandinavia, Malta, and Russia, with new international partners finalising their Envy partnership deals.
“Envy has proven to be a fast-rising star as a top selling line in only our first year,” says Envy Menswear Director of Global Sales & Operations Christian Savoie. “Our retail partners are devoting more space in their stores to make room for sexy menswear after seeing profits derived specifically from that market. We’re thrilled with the consumer interest in Envy, and are pleased to have had such a successful launch year.”
“Enyv is such a great addition to my store!” exclaims Adult Shop 61 representative Caitlyn. “Great packaging, soft, durable material, and a great variety. Our customers have given us such a great response to the product. I would highly recommend this to everyone!”
Envy launched at last year’s International Lingerie Show in Las Vegas, Nevada, with 55 initial styles, including briefs, thongs, boxer briefs, mesh briefs, tank tops, mesh tanks, and more. In the 12 months since, Envy has introduced hotter and trendier styles for the fashion forward man,
We are very proud here at Men and Underwear blog to be among the first blogs to feature the brand only weeks after the launch. Read our post here
From all of us, a very happy first anniversary to Envy and wish them an even brighter future in the male underwear industry. 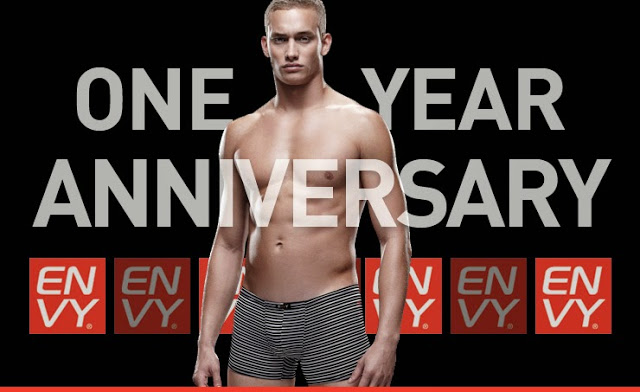