Hotly anticipated, Marco Marco has just debuted their 2017 collection, which is sure to be a hit with their current fans and bound to entice more to come into the fold. The following pieces are part of their line that are guaranteed to be worth the wait. The model in the photos is Andrew Biernat.

Marco Marco has already featured their Andrew Boxer Brief on the runway during their 2016 fashion show and this sexy boxer brief is the epitome of everything the brand is known for: four-way black muscle mesh, neon green stitching with neon yellow piping, and the label’s distinctive double M logo print. 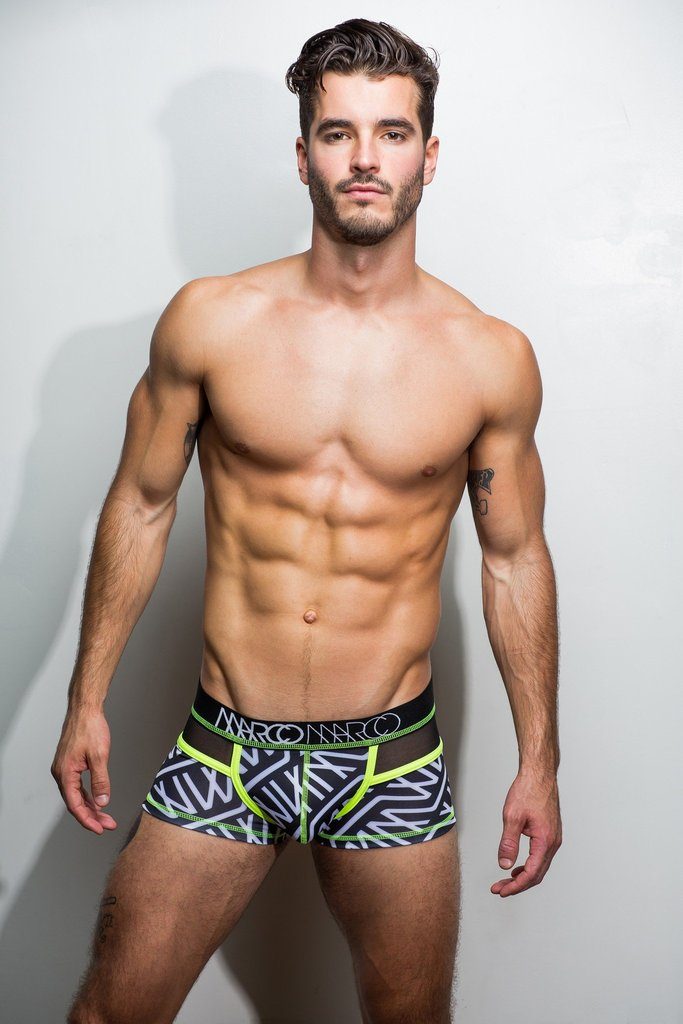 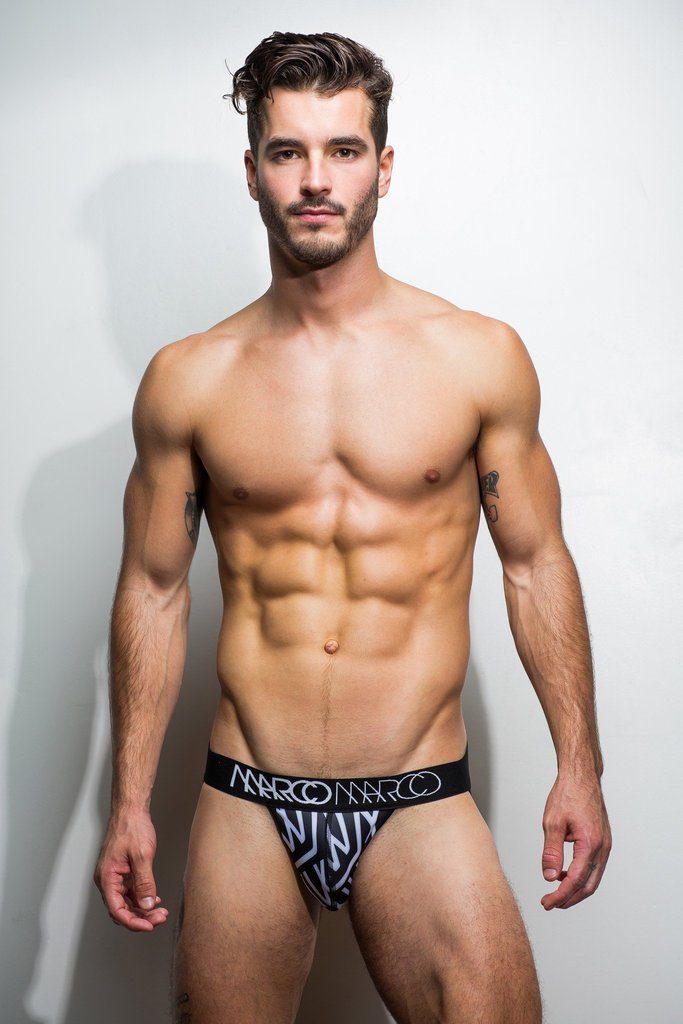 The new Swim Brief from Marco Marco is bold on style, featuring an inviting poolside pattern, complimentary neon yellow piping at the top of the waist, and are lined with mesh for optimal support, comfort, and quick drying time. 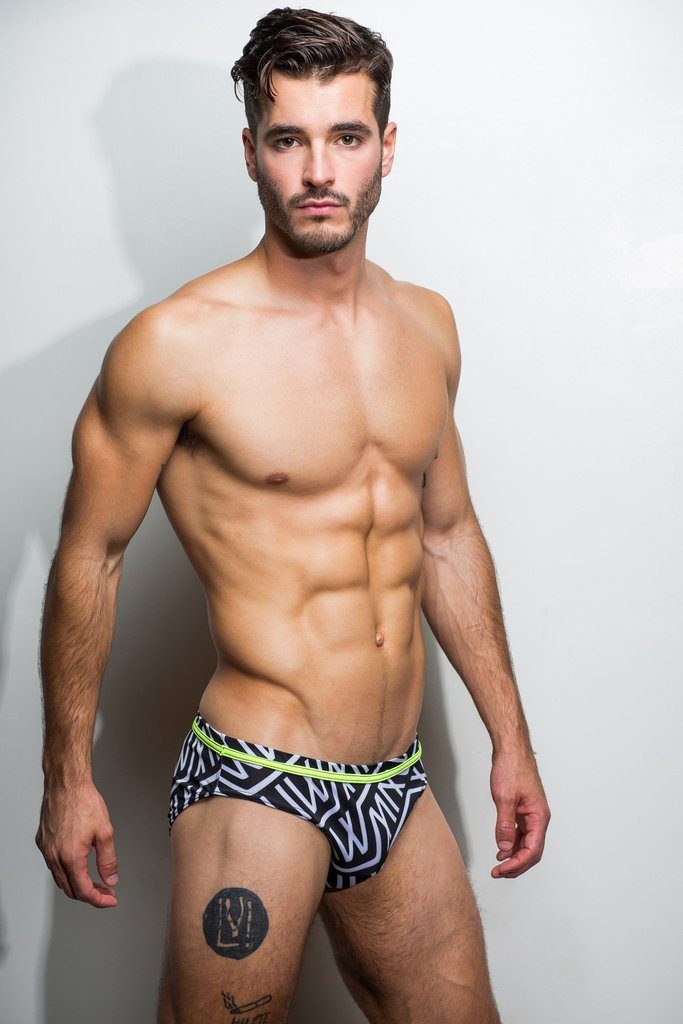 As a fun, sexy option for fashion conscious men, the Steven Brief from Marco Marco boasts neon yellow piping just over the crotch, four-way muscle mesh in black on the side, a peekaboo back just above the lack spandex seat, and the label’s double M logo print 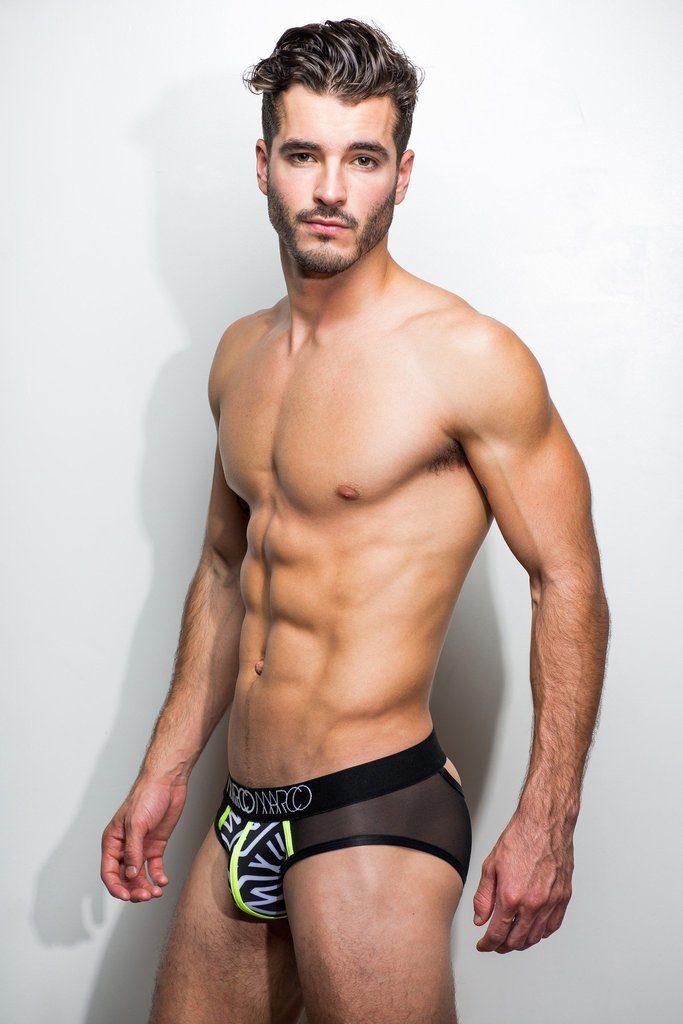 Featuring black muscle mesh, neon yellow piping, and the label’s distinctive logo, the Daniel brief from Marco Marco looks like an ultra low-rise brief that comes equipped with a V-shaped black mesh seat for an added layer of sexiness. 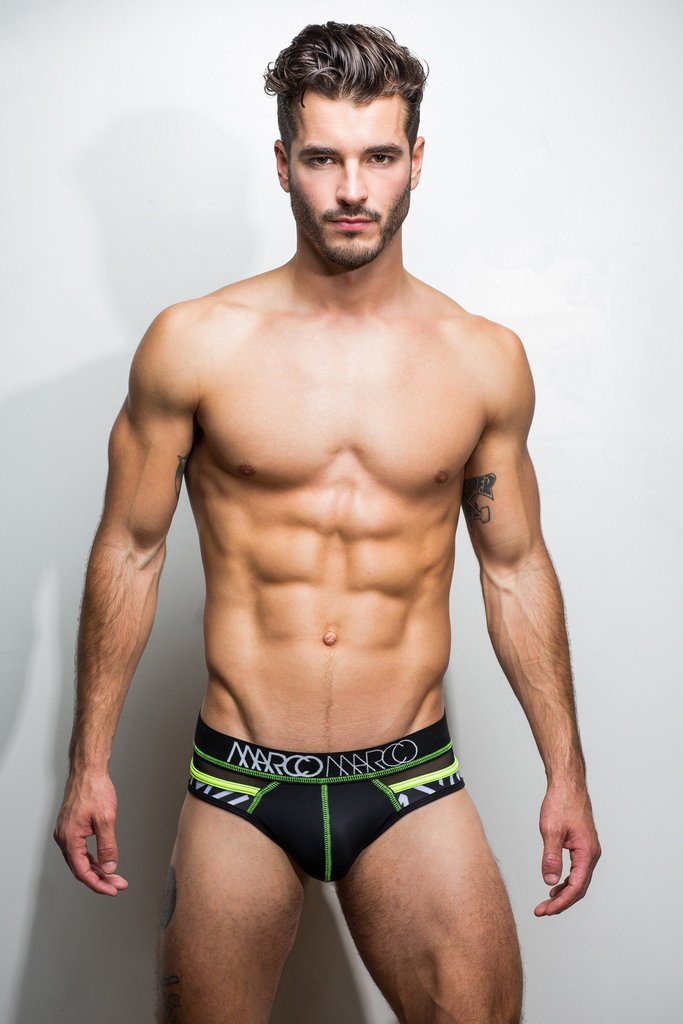 The Matthew Brief from Marco Marco significantly plays up the fun factor in their design that celebrates lines and contrast: neon yellow muscle mesh over the crotch, yellow piping down across black mesh to a black spandex lower seat, and the brand’s double M logo print appearing over the crotch are winning features that make this brief a winner across the board. 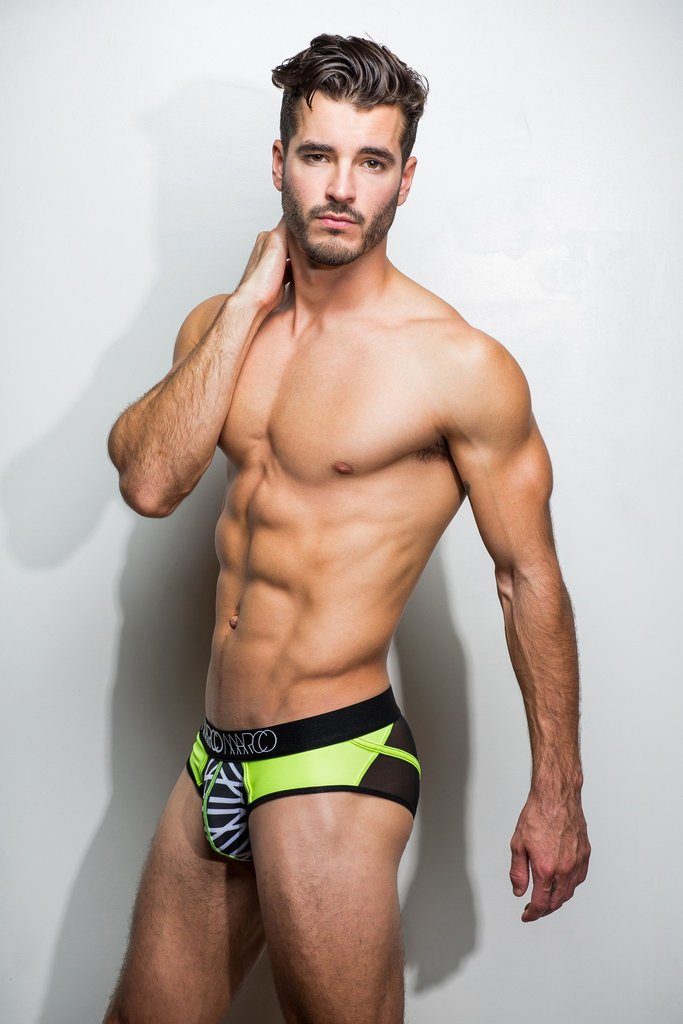 With neon yellow piping featured prominently down the thigh to the seat with a black mesh back, neon yellow spandex on the inner thighs, and the label’s double M logo appearing in print on the outer thighs, the Jesse Boxer Brief is guaranteed to make a splash with fans in 2017. 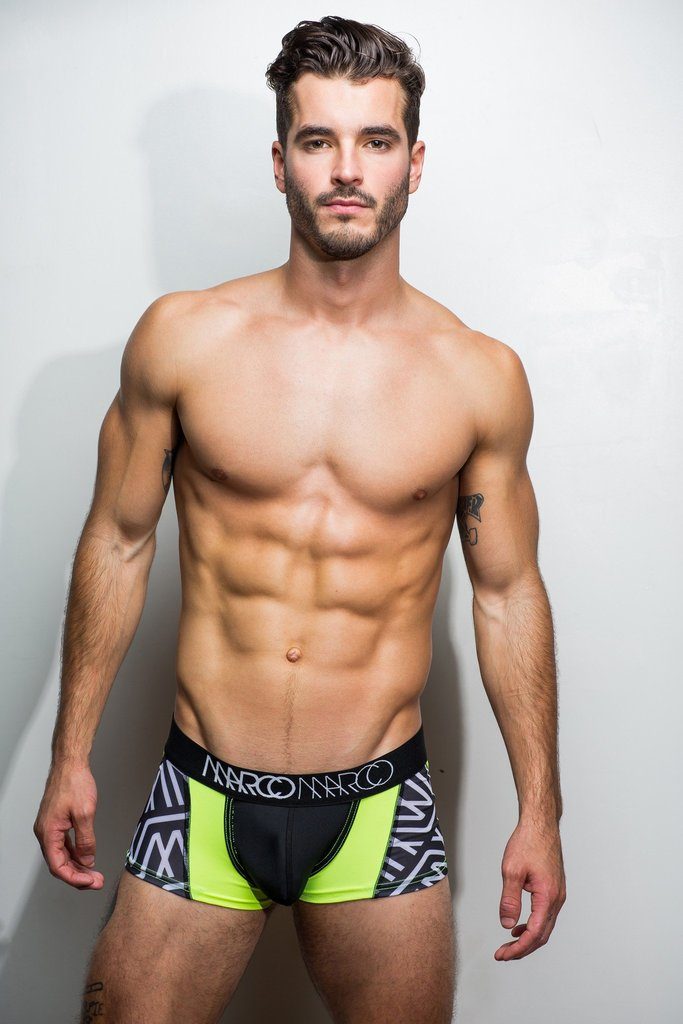 Featured on model Laith Ashley first, the Laith Sport Short features yellow spandex and a double M-printed crotch with solid black spandex covering the inner thigh. The black mesh adds breathability around the outer thigh with the yellow mesh providing full coverage in the back. 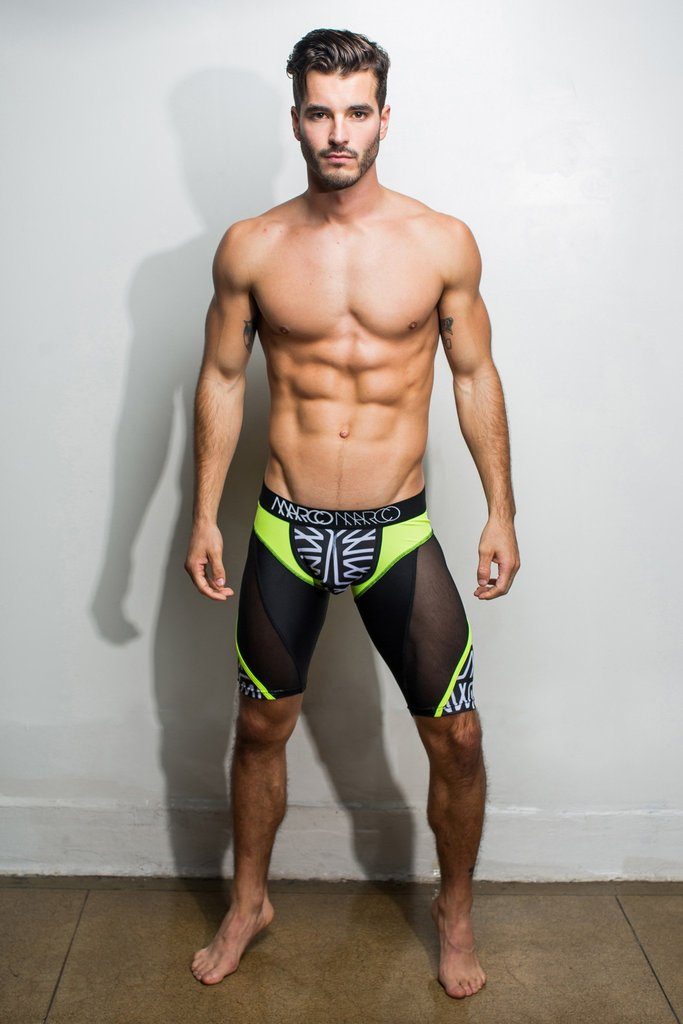 Marco Marco gives leggings a sleek makeover with their Murray Legging that features black spandex on the inner thigh and lower leg that contrasts with the angular neon yellow piping. The brand’s double M print logo is displayed in neon yellow over the knees as an added touch. 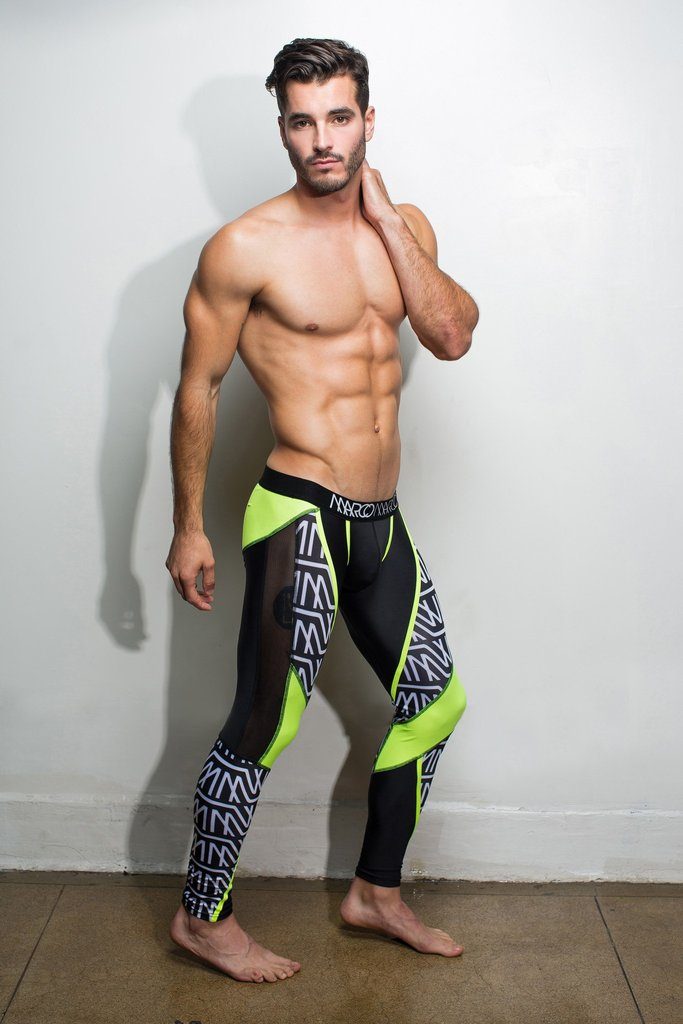